Over the last couple of weeks, I have been collecting all information on sales of Exquisite jewellery across the internet and intend to continue to compile as much information as possible. I am also waiting to hear back from the W A P Watson company that is still based in Solihull. Until I hopefully hear back from the company, I have estimated that the signature by Exquisite was first used in the early to mid-fifties, when many other jewellery companies started to patent and mark their designs. At the end of this blog I will discuss more the signed and unsigned jewellery, but first a look again at the Birthday series.

I have verified that the snowdrop was January so:
January - snowdrop flower bunch
February - primrose 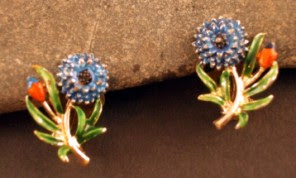 The Birthday series was available in brooches, necklaces and clip-on earrings. During my time collecting jewellery and researching I have not found a bracelet. But I can not imagine that there would not have been produced. Is there anyone who has an Exquisite Birthday bracelet?

The series appears to have been produced over a long period of time and dating each piece can be difficult. I suspect that they were produced from the late forties to the eighties. Dating may be possible from the packaging as that seems to differ. But the brooch could have been switched into older or newer packaging at some point and unless the history of the jewellery is confirmed, should not be relied on for dating. The birthday series can be found in several types of boxes, also on a plastic cushion with the flower identified and the month. There was also a gift tag produced that can also be sourced and available with some pieces of jewellery

The brooches are available in two sizes - large size of approximately 6 - 7 cm x 4 - 5 cm. Then a smaller brooch of approximately 5 x 3 - 4 cm. The brooches are not a smaller or larger version of one design but do have some variation.
The large brooches seem to be the most available with a smattering of the smaller brooches coming onto the market. The majority of the brooches in the Birthday series appear to be signed but I have seen one not, which I will discuss in more depth later in this blog. All the brooches have the characteristic Exquisite bow. The metal differs from a gold to a silvery gold to silver. I suspect that the brooches were originally gold plated and the plating has worn over time or been rubbed off when cleaned. She who has just turned a gold-tone cat pendant silver by just polishing today, not an Exquisite one I hasten to add!!

The earrings match the brooches and are of the clip on type. Again the majority appear to be signed. They are available and appear for sale on a regular basis. Some months are more available than others, September and the summer months have been offered for sale, but the winter months of January and December have not appeared for sale recently. It is a matter of waiting and searching regularly!

Necklaces that match the brooches and earrings do come up for sale and are now commanding a good price. Most of the necklaces are not signed, though some are. They may be signed on one of the links. They are also recognised by the chain and the hook fastening. Some carry the trademark of the Exquisite bow on the end of the chain. I have another type of necklace by Exquisite that has these trademarks and unsigned but not one of the birthday series as yet.
Necklaces are quite rare in quantity compared to the brooches that appear for sale, it may be due to two reasons.

The first is that the enamel on the necklaces does wear off and so many of the necklaces offered for sale are not in excellent condition. The other is that when they are not signed, many antique and vintage sellers do not realise they are Exquisite and therefore passed them over when buying to resell.

I have been enchanted by the Birthday series because of the variety to collect. As the enamel was hand painted, each piece can differ in colour. For example, the difference in brooches of the same month is enormous. The leaf green colour can vary between a bright green to a softer tone. The flowers that can appear in nature in many colours can also differ. The carnation goes from a dark pink to a light pink and can even be found in two-tone colours of pink and white. All very charming and great fun collecting.

Exquisite produced many series such as the leaf series, the tree and their fruit series, the Scottish souvenir series and many more. They also used a wide range of materials from faux pearl beads, mother of pearl, glass diamante crystals, marcasite, faux gemstones and plain gilt.

In my first blog about Exquisite, I questioned the French connection as all the jewellery that I had seen, looked very English or Scottish. But I have found a connection in the fifties (that I need to explore a bit more) with the jewellery designer Marcel Boucher. I will leave this for a future blog subject and debate

I have over the last few weeks been buying unsigned and signed pieces that I suspected as being Exquisite. From the pieces that I have gathered. I am edging toward the possibility that the unsigned pieces were the early ones and that some have worn signatures were of the early production of signed jewellery and later ones were more robust and the signature remains crisp. But that is only a theory that I need to have confirmation. A brooch for December recently was sold on eBay (UK) unsigned attributed to Exquisite. The difference was that the Christmas roses were in a pink colour and the red berries were green. Without a comparison between the brooches, identity can be difficult. They did look the same in the photographs but no back view was shown. However, the pink Christmas rose brooch was very pretty in its own right.

More on Exquisite jewellery soon. In the meantime - here are two brooches from the Scottish souvenir series. One is signed - the other has a partial Exquisite signature. Have a look and next blog I will explore the differences. 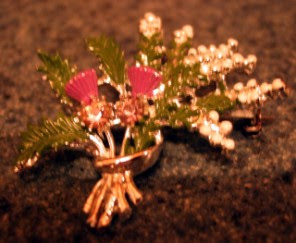 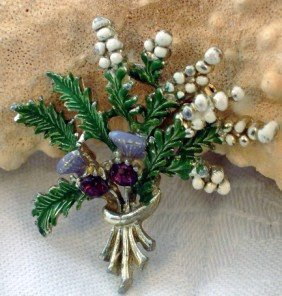 And side by side, the last two photographs are quick snaps and will have better ones in the next blog?

I have been unable to show photographs as without the original photographer's permission I will not use their photographs. However, if you have any photographs or comments please email me or add a comment to this blog. Any information gratefully received. 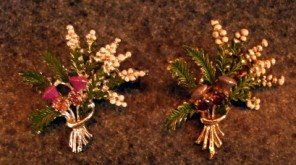 Jewels and Finery
Posted by Sue at Wednesday, January 21, 2009