One of the great producers of jewellery in the UK was Ciro Pearls. Although an English jewellery company, they sold worldwide with shops in America, London, Manchester, Glasgow and many other places. We will be showing a brochure/book from the company, just one of many produced by them. This one was from around the Coronation in 1953 of Queen Elizabeth. The books were not dated but although they looked the same, they were different. 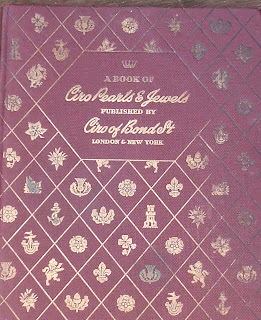 This edition starts with photographs of the replica Crown Jewels that they made and were on display around the UK, during the Coronation year.  Below is the St Edward's Crown. 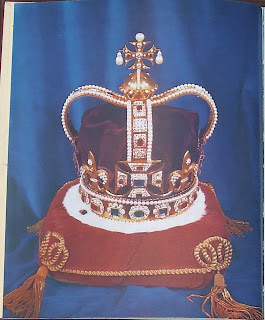 The jewels were commissioned by the owners of Kemsley newspapers. It appears several sets were made and were much more than stage property. It cost in the 1950s, about £10,000 to produce them - I wonder where they are now? 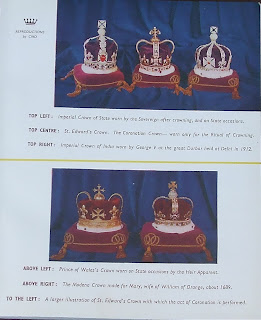 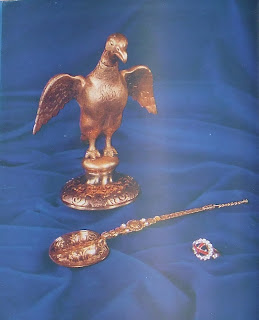 Above is the Ampulla in the shape of a golden eagle, which contains the oil that is included for anointing the Sovereign. The Golden Spoon into which the oil is poured.

On Jewels & Finery UK, you will find some of the vintage pieces produced by Ciro of Bond Street. Some were signed and will be on designer jewellery, but many of their items were not signed. Famous for their pearl necklaces and sparkling rhinestone brooches.

Then there are reproduction jewellery of the actual Crown Jewels. This is the small pin brooch of the anointing spoon.

This is just the first 3 pages from the Ciro Pearls book and during 2013, we will be showing the rest including some dress clips and pearl necklaces with their distinct clasps. Have a Happy Christmas.
Posted by Sue at Sunday, December 23, 2012