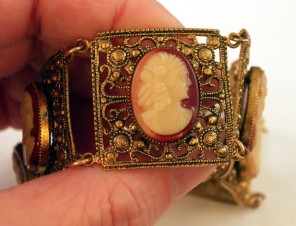 Cameos have been around for centuries. Still very popular today. Whilst looking at antique jewellery at a fair the other day, we overheard a young girl getting very excited over a selection of cameo brooches and was having a hard time deciding what to buy.
Unlike many vintage jewellery dealers, we now actively source cameos both old and more modern

Unlike many cameo enthusiasts we actually like the modern cameos that depict the popular goddess. She fascinates us - who actually first produced her? From our acquired knowledge she appeared around the late sixties and is still used today. 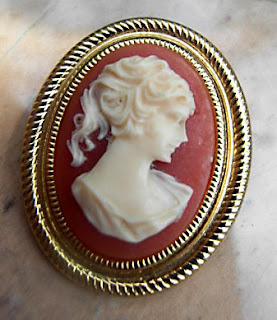 So as cameos span all ages we started an antique and vintage cameo section on Jewels and Finery. (Website now closed) All the cameo pictured have now been sold or destroyed in a fire that happened at our storage unit.

Here are just a few cameo jewellery that we have sourced in the last 10 years. The pictures are taken from our archives.
Posted by Sue at Monday, May 11, 2009