On Sunday my daughter and I with her friend, went to the NEC, Birmingham for the Clothes Show Live 2010.
Aimed at teenage to twenties fashion and lifestyle, I still enjoy going. 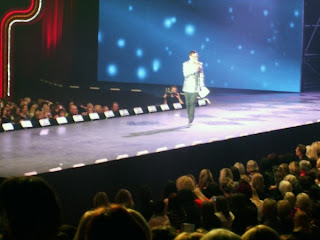 None of the clothes were suitable or even fitted me. My diet is going well though and so maybe next year!! Plenty of choice from "market type" stalls to designer wear at lower prices. Short dresses were in plenty as well as trousers, tops, woolly hats, leather gloves and Pashmina scarves. Small bouquets offered that something a bit different from the high street fashion lines.  Again I visited the vintage section with clothes, jewellery and accessories.

This year there was a section for making clothes and accessories. Cloth, buttons, patterns, yarn, sewing machines and expert advice were available. Along with colleges that offered specific fashion and textile courses.

Make up by names such as Bourjois and Rimmel, along with many other manufacturers are for sale. the choice is amazing and offers abound. Various stalls offer make overs, hair styling and massage. One celebrity hairdresser Lee Stafford, has amazing stamina. Every time I passed his pink stand, he was talking to people, having his photo taken and posing with everyone. Not bad considering we were there from about 10 am and left after the last show at 7 pm!

The show was hosted by Gok Wan but I could not see him over the sea of people at his book signing. 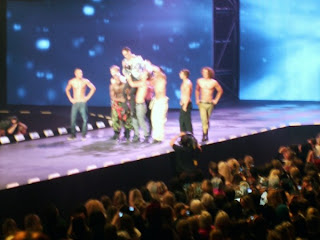 Next to the Clothes Show and included in the tickets was the Dance Show.Stalls specific to dance and many small and a large stage to watch many forms of dance. One of our friends is a member of the Phoenix Dance Company and so we watched her appearing on the large stage. 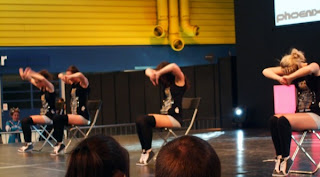 The Phoenix dance Company in action

This year I came away from the shows with enough make up to last a long time, leather bags, magazines, free samples and lots of jewellery both vintage jewellery and some new ones.

In all the hours spent at the shows, I still do not think I saw everything as there is so much to see and do. My only gripe is the lack of seats and food prices are far too high.

This year I managed to video part of the show. In fact its the first time I have videoed anything!! So shaky hand and a bit distant with muffled sound. Well what do you expect ....it was a total mistake really I pressed the wrong button on the camera and should have taken a photograph.

And that I will post this week when I have mastered You tube!!