Little is written about the beautiful blue and black jewellery called Carnival or iridescent beads and glass pieces. 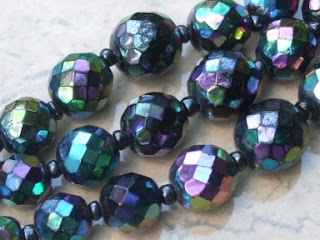 Now I call this type of jewellery - carnival. The name came from my mother and her mother, so this is part of my heritage. It is available in blue and black colours mostly and can be found in both antique and vintage necklaces, earrings, brooches, hat pins and bracelets. Also any other jewellery that used beads and glass. Now days the iridescent look is available on plastic beads. 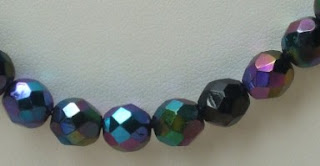 Samples of "iridescent" jewellery developed from Roman glass that changed colour over time. It is produced by spraying, adding or fuming (a type of smoking pieces) metallic salts onto coloured glass. It then produces an oil on water effect. The colours and intensity depends on the base glass and amount of salts added. It would have looked enchanting by candle light and is still very pretty when reflected by electric lights today 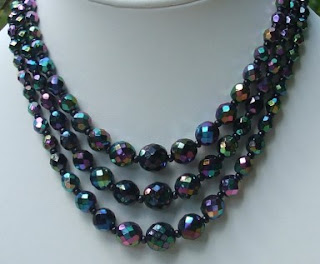 It seems to have first come into fashion at the last quarter of the nineteenth century. Probably as a result of the changes in mourning jewellery, when people still wanted a bit of decorum and to retain the black look, but also were starting to crave a bit of colour.

Fenton in the US in around the 1908 period started to use this technique for making pressed glass bowls and glasses. Its popularity increased from the 1900s up to the 1930s, when the cheaply produced decorative bowls, plates, and glasses were prizes at carnivals fairs. Hence where the name "carnival" derived from. The decorative glass was produced in large quantities and in many different colours. The most popular colours for pressed glass were marigold, amethyst and then the much scarcer blue. The popular blue and black glass jewellery was the colours used most and the many other colours are not represented as much. Common sense tells me that it was more expensive to produce the darker colours that light, but I am not a glass making expert?
Then there was a further revival of carnival glass jewellery in the late 1970s to early 1980s and it is still produced today in lesser quantities.

The clear glass jewellery with the "Northern Lights" effect called aurora borealis (AB) was developed in the mid fifties and gained more popularity over the darker carnival jewellery.
Again common sense tells me that aurora borealis was being developed, when the second world war stopped many new innovations. After the war, the trend was for colour - hence the darker and more somber colours were forfeited for the bright cheerful AB effect. 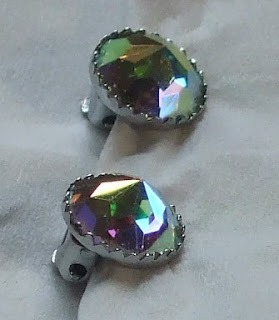 The jewellery was produced in Bohemia in the late Victorian era. But it was also produced in the UK, USA, Germany, France and many other countries.

The dating to the jewellery is made by reviewing the original findings, but also by the feel of the glass. Early samples are much heavier than later ones. They also have a better quality look to them. 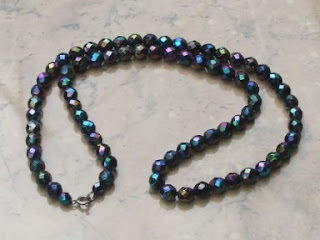