This is the third part of the Ciro Pearls vintage jewellery catalogue. During the Second World war. Almost every now vintage jewellery company turned their factory over to producing goods that enabled the war effort against Germany. Patriotism was strong and because of this whole hearted effort by the many companies, it enabled the war to be won. However it had a detrimental effect on our industry and in the fifties enough jewellery could not be produced with the restrictions on metals still in place.
An article was written in this catalogue that explains how Ciro Pearls has improved over the last 15 years. I like how the aftercare included restringing of the necklets and pearl necklaces - real and faux. 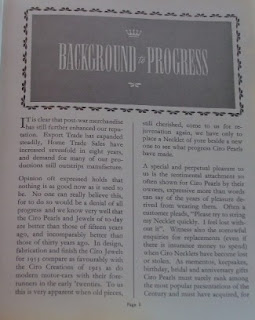 The next pages show the show rooms in different parts of the UK in large department stores. 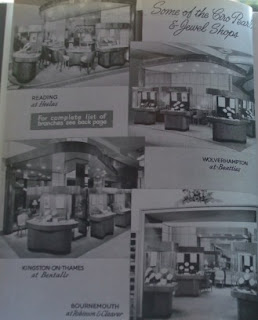 The showrooms include ones in Reading (Heelas), Wolverhampton (Beaties), Kingston-On-Thames (Bentalls) and Bournemouth (Robinson & Cleaver). they looked very plush with tables and comfortable chairs in which you sat and chose your necklace or earrings. Complete with mirrors to try on before buying. A far cry from today's stands that have very little room around and no mirrors. However trying on earrings that someone else may have tried on before. Still makes me cringe. 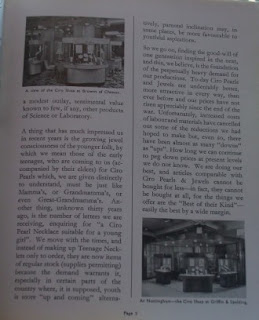 Further black and white photographs of showrooms in Browns of  Chester and Griffin & Spalding in Nottingham. In this article it was noted that younger women in their teens were becoming more fashion conscious. So Ciro Pearls has decided to stock necklets suitable for teens as before they would make one to size by order only. 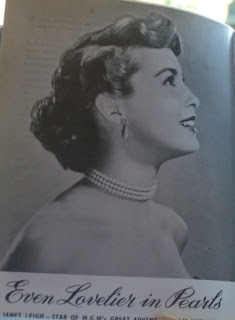 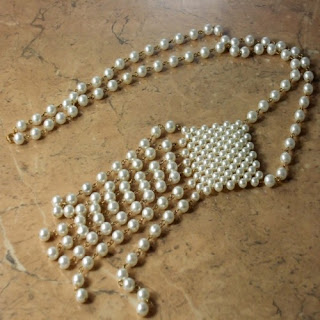 Above not a Ciro Pearls pearl necklace but a modern pre owned one that has fringe detail.