Changes with jewellery signed Exquisite in 1954

Important changes happened within W A P Watson Ltd with Exquisite jewellery. Up until 1954 the company has manufactured their now vintage and sold to shops and other places as a wholesaler. Their whole range of Exquisite jewellery was not really attributed to them. But in 1954, the company built a whole new factory in Solihull and moved from the center of Birmingham in the Jewellery Quarter. After this move this policy was produced and distributed to the people working there. 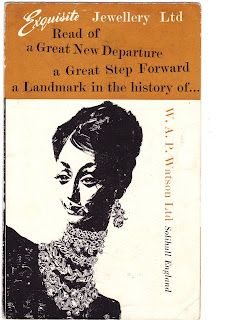 Instead of just selling their jewellery it now became "Exquisite jewellery Ltd" a subsidiary of WAP Watson Ltd. They brought in more control of their distribution. Introduced new lines into their production. In fact the 1950s very a fabulous time for many manufacturers. Post war and still with rationing in place until much later in the decade. The country was crying out for jewellery. No longer having to worry about war, bombings and no supplies coming into the UK. WAP Watson found it difficult to keep up with the demand. 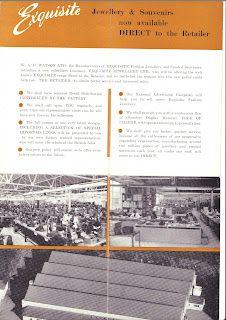 In an attempt to bring in a higher class to their range. Exquisite had some imported pieces incorporated. We know that they brought some from Boucher in the US. They also estimated that about 2 million pieces of now vintage jewellery would be produced in one year. 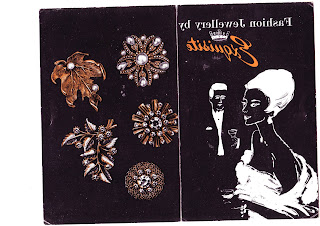 This policy produced shows some of the now vintage brooches, vintage necklaces and vintage earring that was available at that time. This helps with dating them. It also shows views of the factory in Solihull that is long gone and now a large housing estate. I don't think any of the roads and building are named after this company either. Which goes to show how little known how important this company was in the UK. It was the second largest seller of costume jewellery in the UK. The first probably being Coro. Why do we not celebrate our heritage like the US does I will never know?