Jewellery glossary, meanings and terms explained A to Z

Here is our jewellery glossary with as many jewellery meanings and terms we know of. Its a bit like a dictionary for jewellery really, but not for the spelling - But that does help!! It is a  brief explanation of the words used in descriptions that you may come across in looking for a brooch or earrings you may want to buy; or to help in any jewellery research you may be undertaking. Each letter of the alphabet is looked at its meaning in each section separately. From A to Z and we will be undertaking re-publishing this glossary through out 2021.

Glossary of jewellery starting at  with the first letter of the alphabet - A From abalone to Aventurine, azurite and many other terminology that begin with A in between. We have built this jewellery glossary and dictionary to help explain terms used commonly in jewellery that start with the letter A.  ABALONE - This material comes from sea snails and other sea mollusc's. Its thick inner layer has nacre - mother of pearl which is famous for its highly iridescent silvery white, blues and greens mixed with pinks, reds and other bright colours. The colour of this shell comes from the different species used and the creatures actual diet. Highly prised in jewellery making. Abalone was used from the late 1950s and 1960s and continues today. Although it is said to becoming harder to find the shell. 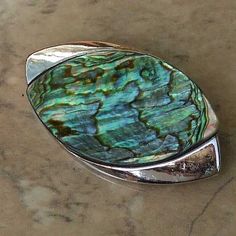 Above an abalone brooch by Exquisite from the 1970s. ACRYLIC - This is a light weight transparent thermoplastic used in jewellery. It was first used in 1933 and has several trade names used including Plexiglas, Acrylite, Lucite, Perspex, Optix and Oroglas. Ideal for embedding objects like coins, diamante, shell, etc. It can also be tinted and coloured. For our acrylic rings available      ADULARESCENCE - This is the term for the shimmering and light playing effect of a moonstone. It comes from the actual field spar variety known as ADULARIA, this moonstone is a beautiful colour from a light blue, opaque to almost clear. Adularia was named after the Adula Alps in Eastern Europe where it was originally mined. Popularly used in Art Nouveau jewellery especially by the artist Rene Lalique.   AFRICAN EMERALD - This pretty green fluorite gemstone is mined in South Africa. Although given the name Emerald it is in fact not a true one.  AFRICAN JADE - This is a green garnet that varies in colour and can have black inclusions in. So not really jade at all. It is a much prised gem though as it is said to attract love! It can also be known as Emerald Quartz. AFRICAN OPAL - This new opal was discovered within the last 10 years. a much earthier color in beige, white, yellow, brown and green. It lacks the translucent and fire qualities of true opals.      AGATE - Quartz with strata of different colours or inclusions which can resemble moss, have banding or just be in a plain coloured. Named for the river Achates and one of the oldest found gemstones used. It is used to ward of storms and is said to be a protective stone. Used extensively in jewellery especially Scottish agate jewellery. Easily coloured so now found in a huge variety of colours. 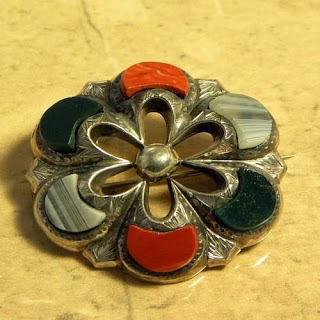 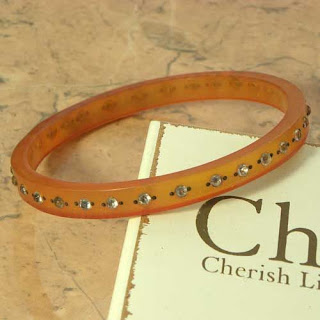 A bangle in Bakelite with clear diamante and brad studs. Circa 1920s of age.  Aquamarine - Pretty blue popular gemstone. ARIZONA RUBY - Not a ruby but a garnet from Arizona.    ARIZONE SPINEL - This is a garnet not a ruby from Arizona that closely resembles a Spinel.  ARCADE SETTINGS - This is when a gemstone is set into a ring shaped base and held securely with claw prongs. Also known as a coronet or chaton setting.  ARCTIC OPAL - Man made stone that has a blue background and green markings. Not a real opal but faux variety. ARKANSAS DIAMOND - This is clear crystal rock and so not a real valuable diamond.   ART DECO - This style of jewellery and decorative art came in following the First World War, it replaced the dreams of peace and beauty of the Art Nouveau era. This had been banished by the brutality of the war and so replaced was by the machine inspired modernist look leading to Art Deco. 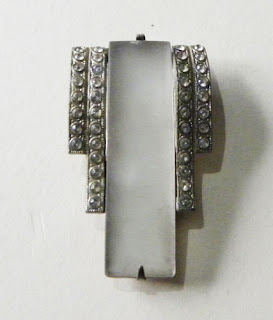 Art Deco dress clip - above. ART NOUVEAU - A style that gripped France through out the middle of the eighteen hundreds and then spread to Europe and lastly to America. It flourished and faded prior to the First World War of 1914. Aspects of Art Nouveau include naturalistic, fantastical and medallion subjects and designs. 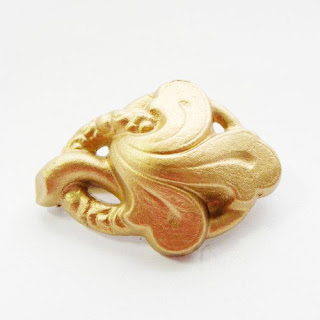 Art Nouveau brooch with a naturalistic design. Light weight and hollow.     ARTS & CRAFTS MOVEMENT - From between 1860 and 1910 this was a craft movement that flourished as a movement against the mass produced machine products being produced. It was a back to tradition design period with simpler forms used. Art Glass - glass with white or other coloured swirls and stripes. made to appear like a real gemstone. Circa 1970s to 1980s were the main years that this was used in jewellery cabochon.. 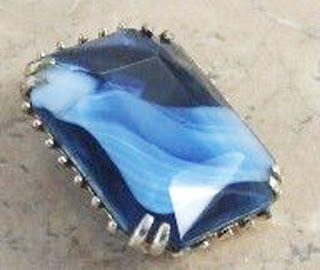 Blue Art Glass brooch circa 1970s. ARTICULATED - jewellery is said to be articulated when it has two or more moveable joint. This makes it more flexible and interesting to wear. 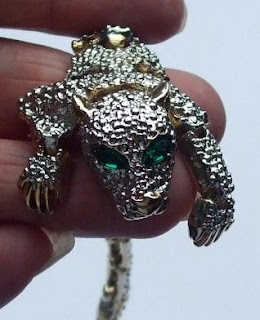 Articulated large shoulder brooch. It is articulated to allow movement. Circa 1980s of age. ARTIFICIAL QUARTZ - Every natural crystal virtually has an artificial counterpart. It can be very difficult to distinguish one from the other. First manufactured in 1845 but until the 1970s was not used extensively in the jewellery industry. Includes Austrian Crystal ASSAY - Used when testing and analysing metal in jewellery. Usually for hall marking purposes.  AURORA - She is the goddess of the dawn and sister of Helios. The dawning of a new day can be interpreted as the dawn of a new century. Thus it was a popular subject for Art Nouveau jewellery. The goddess is often depicted in a swirling dress, outstretched wings and holding a garland of flowers.    AURORA BOREALIS (AB) - This is when diamante, rhinestone or crystal is coated with a material that makes the "oil on water" effect of iridescent multi colours. Invented and patented in 1955. So very helpful when dating a piece of jewellery. 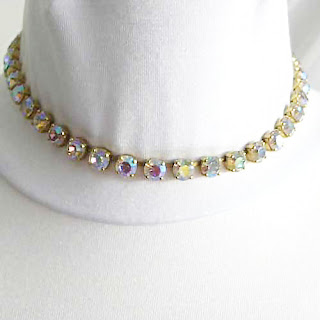 A pretty choker necklace with aurora borealis diamante. Clear diamante that shine various colour tones. Necklace circa 1970s to 1980s.  AUSTRALIAN RUBY - This is a fine garnet. The colour ranges from red to a deep pink in both translucent and opaque looks.       AVENTURINE QUARTZ - Quartz with glittering flakes of mica (a mineral that has the properties that seem to glitter) inside them. The most common colour is green, but it comes in brown, orange, blue and grey. AVENTURINE GLASS - this is called goldstone and is now available in a wide range of colours including the traditional gold and blue. It is a man made glass with golden or sparkling copper features just like the quartz version. The common miss-spelling for this stone is Adventurine.
AWABI PEARL - This is the Japanese name for abalone pearls. A natural iridescent blue pearl found naturally in a mollusc's species. They are by nature very difficult to culture and so are the rarest and most desirable of pearls found. AZURITE - An azure vibrant blue gemstone that is fairly soft. Used as a dye for textiles as well as mixed with other gemstones such as malachite. Mainly used for decorative carving. Rare and mainly a collectors gem.
Jewellery starting with B.
Updated January 2021. Copyright Jewels & Finery UK/Vintage Geek Jewels.
Posted by Sue at Sunday, January 03, 2021