jewellery words that begin with the letter C

Jewellery words that begin with the letter C

Continuing our jewellery terminology glossary. Here are the jewellery terms beginning with C. Cabochon - A stone cut into a curved or smooth round shape with a flat surface and not faceted. Cairngorm - Brownish/yellow variety of a smoky quartz. Calcite - Harder than Halcite semi precious stone and has a glassy sheen that can come in blue, clear or orange. Cameo - A shell or other material with a raised relief profiled theme. It can be carved or manufactured. Cape Emerald/ Cape Chrysolite - An attractive milky green mineral called Prehnite. Carat - The unit of weight of a precious stone or metal.  Carbuncle - A garnet cut as a cabochon not faceted. Cat's Eye or Cats Eye - Varieties of chrysoberyl that allow light to reflect. Carnelian/Cornelian - Rich orange semi precious stone. May have some banding. Celestite/Celestine - Soft grey-blue mineral that has been used in making ceramics and glass. . Chakra - Spinning vortex of subtle energy. Chalcedony - Grey - blue and sky blue quartz with micro crystalline varieties of quartz. Chalk - Soft white porous rock Champleve - Enamel work where metal is engraved and then filled with enamel.
Charm - Usually a small attachment to a chain bracelet. Now charms can be attached to necklaces and other pieces of jewellery  Chasing - Surface texturing of metal by hammers and punches. Chatelaine - Pin or claps with hanging chains for items of continual use, such as keys, watch, scissors, etc. Chaton - The central ornament of a ring. Chi - Chinese term for life energy. Chrysoberyl - Species of semi precious stones to which Cat's Eyes and Alexandrites belong to. Chrysolite - Pale yellowish green stone. A variety of Peridot. Chrysoprase - Light green semi precious quartz. Cinnabar - Soft and porous rock in a rich red colour. Beware of fake Cinnabar from China in recent years. Citrine Quartz - Uncommon with warm tones of yellow sunlight. Today it is produced from a more common quartz amethyst which turns a golden yellow when heated. Claw Set/Coronet Setting - Term used for setting a stone where the claws project from the base of its setting. A Coronet Setting is always round, whilst a Claw Setting might be square. Clear Quartz - Also known as Rock Crystal. Clear Topaz - Clear - blue stone that can look like Sapphires. Clear Zircon - Hard stone that imitates a diamond. Clip - Mechanism used in earrings and scarf clips to hold in place. Cloisonne - In enamel work where metal separate the coloured enamel filling. Cocktail rings - In 1925 heavy elaborate rings of unusual design were given this name because they were suitable to be worn to a cocktail party. Collet Setting - Method of setting in which a precious stone is held in place by wrapping it in a rounded band of metal. Collier - Wide statement necklace which encircles the neck from throat to chin Copper - Chemical reaction between other minerals and solutions forms copper. Coral - Formed from the skeletal remains of small sea creatures. Red is the most valuable. Now rare due to its over harvesting. Corbeille - Gifts made by a bridegroom to his bride. Cordonniere - Girdle twisted to resemble cord. It is tied in the front with long ends hanging down. Cornelian - Clear red Chalcedony stone. Corundum - Species of semi precious stone of which Ruby and Sapphire belong. Next down from a diamond in hardness. Costume Jewellery - Fashion ornaments in non precious materials - also known as fashion jewellery. Crackled Quartz - Also called Star-Burst Quartz. Clear quartz is heated and cooled to give a cracked effect. Dye is absorbed to give a very sparkly appearance.  Creole Earrings - Hoop style that has a thicker base than top. Crystal - Mineral with regular planes and faces reflecting a regular internal structure. It can also refer to glass as in Swarovski Crystal. Where the glass is highly reflective. Cubic Zirconia - See clear Zircon. Curb - The most common pattern for gold chain bracelets. Updated May 2022 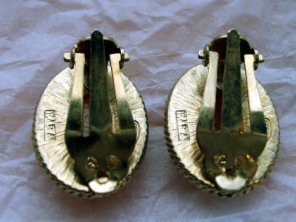 Clip backs to clip on earrings. 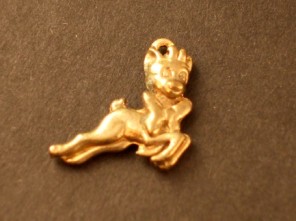 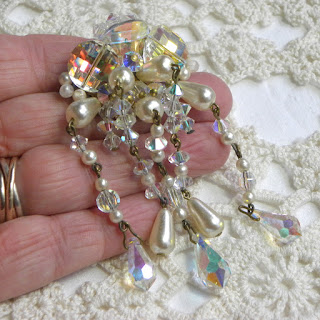 Crystal beads in glass in this brooch 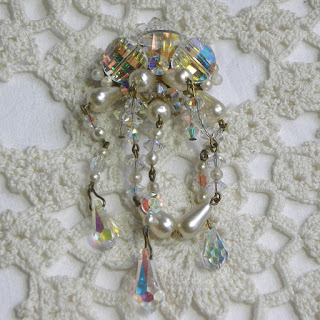 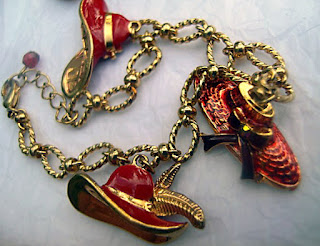 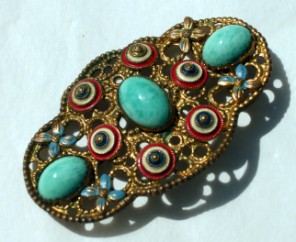 Turquoise coloured stones called cabochon in this Czech brooch.
Posted by Sue at Monday, May 30, 2022