The terms second hand is used liberally on many websites and on auction houses, but what actually does this mean?

Antique jewellery is essentially jewellery that is at least a hundred years old or older. So Victorian jewellery and jewellery that was produced at the turn of the twentieth century or early Edwardian; can officially be called antique. This cameo brooch is antique. Victorian or earlier - the pin is longer than todays pins. Cameos profiles can be a clue. Her nose is long which dates the cameo as older, where as a turned up nose became popular mid twentieth century onwards.

Vintage jewellery is the term that is most often miss used. Jewellery becomes vintage when it is over twenty years old. So jewellery produced in 1989 and before then - up until it becomes an antique should be classed as vintage. 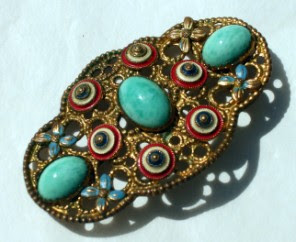 This art deco brooch is classed as vintage jewellery.

Jewellery produced since 1989 up to yesterday is second hand or used. However because very few people search for second hand jewellery on the internet - we prefer to call this jewellery vintage modern. We hope this term will catch on and become more widely used.

What do you think? 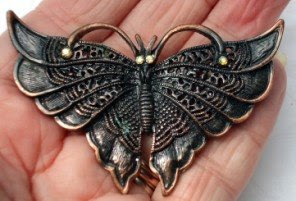 The plastic necklace below - would you say it was vintage or second hand? 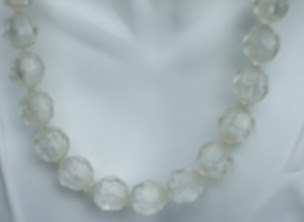 The necklace is an original pop it bead necklace. The plastic beads have plugs that can be pulled out and the necklace can be made into a choker or into two bracelets. Made in the 1950s, pop it jewellery was originally made for the adult market. This necklace is faceted. However children loved this type of jewellery and in the sixties the beads became more colourful and most were sold for childrens use. Wonderful to collect as they are now classed as Art plastic