Jewellery by Hollywood from The Bloxidge Brothers.

Vintage jewellery signed Hollywood was produced here in Birmingham (UK) by the Bloxidge Brothers between 1917 up to about 1972. A very big thank you to Patricia for that information.
With most costume jewellery, some pieces were signed and some were not. I would love to know if this company signed their jewellery right from the start or just in the late 1950s onwards  - when several copy right court cases were in progress.
Dating can be difficult when a popular design is made for several years. However the industry used to produce several different ranges through out each year. So certain styles can be attributed to certain decades. Also using the knowledge on the different time lines of findings, an educated guess can be formed. Only if written evidence is available can the jewellery be narrowed down to an actual year.

Looking at these Hollywood vintage brooches:)

Plain gold and silver tone costume jewellery was produced in the early 1970s. Not all, but the style and fastening look to be around this decade. The sculptured art look was very evident during this time. 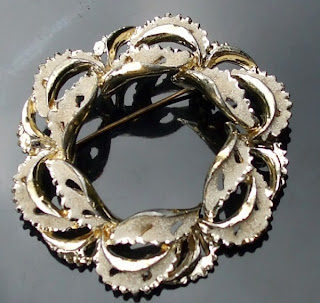 "Frosted" coating to this brooch by Hollywood. Very Christmas in style. Again looking at the two tone design and back dates to around the 1960s. 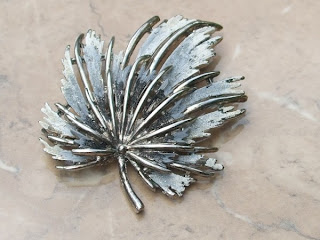 Now this brooch is very interesting. This design is signed Hollywood. But we have the exact same design in a gold tone signed Capri (US company 1952 to 1977)? Not copied but made by the same company - but who was it?  1960s/1970s 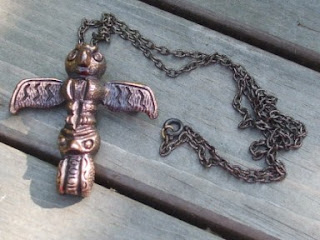 Nice and chunky vintage brooch/pendant necklace. Totem pole design from my own collection. Signed Hollywood. Difficult to date this one. Does this design remind you of another company famous for its Lucky heather brooches? Signed Hollywood in block capitals with what looks like a " after the name only. C style fastening circa 1940s/1950s. 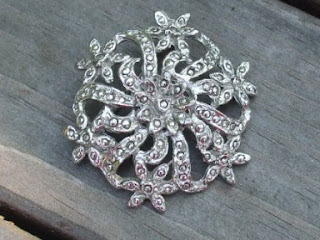 Mock marcasite vintage brooch signed "HOLLYWOOD" in block capitals.safety fastening . Timeless design but would guess at the sixties for this one.  Earlier pieces would have been in marcasite, not molded.

Hollywood produced countless different designs and colour ranges and finishes. Shortly I will be creating an album of Hollywood jewels to view on our Picasa account - just scroll to the bottom of this page to see the photographs recently added. So far we have Sarah Coventry, Exquisite, Miracle and associated, Jewelcraft, Coro and Corocraft, Cameo jewellery and Sphinx albums for information.