How to date vintage costume jewellery

Welcome to "how to date vintage costume jewellery" You have probably typed this into your search engine in the hope of dating a single piece of jewellery. However its just not that easy. In this blog and further tutorial blogs, I will try to give an overview to dating vintage costume jewellery that may help you. First it not easy and you have to take in many factors when dating jewellery:
In this blog I will look at number 1 - The front view.

Take the piece of costume jewellery that you want to identify and look at it in a good light. Does it look a certain age? There is a look to many jewellery that will give you a clue to how old it is. However if you are a novice you will need to study extensively. I would say acquire good book on costume jewellery that have chapters starting at Victorian and going up in decades to the 1990s. Read more than one. I must have at least 10 or more in my collection. I have done some book reviews on this blog that may help. My article on Ezinearticles will also give you a guide for good costume jewellery books for reference Ezinearticle on 12 excellent reference books 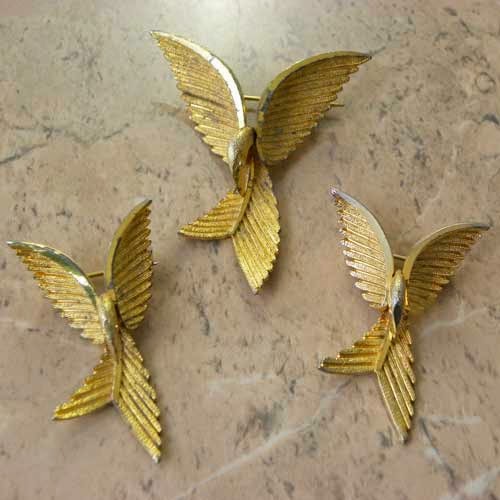 Plain gold and silver tone were very popular in the mid to late sixties and seventies. However it was produced in many other decades as well. But you are more likely to see the gold plate worn, especially on 1970 pieces, as it was a thinner coating than jewellery made in the 1950s. 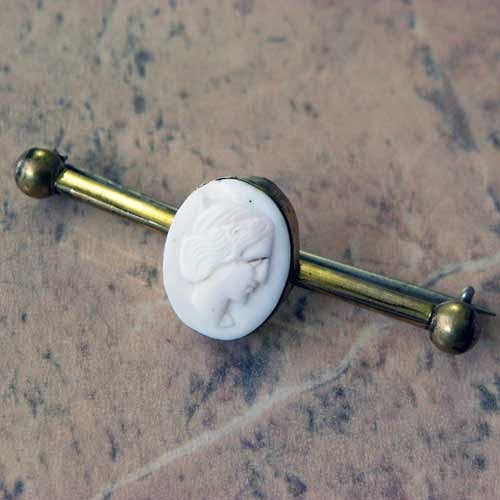 This cameo brooch has the look of being antique, don't you think? You would be right. This one dates to the early twentieth century and probably Edwardian. 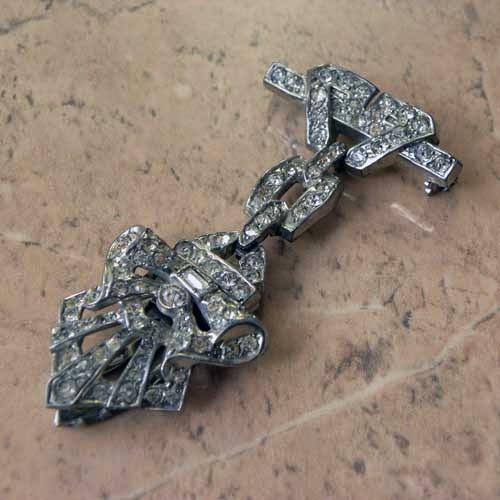 The Art Deco look. This is an original Art Deco brooh and clip. However you need to be careful as many Art Deco styles were produced late on as well. It enjoyed a revival in the seventies and you will see some today that are new. 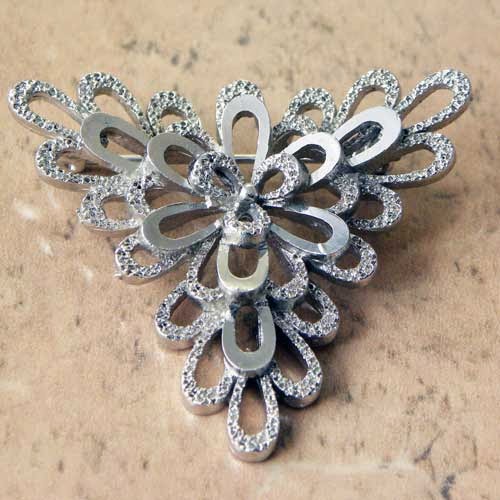 Classic Art Meta style and so seventies. Just by looking at this vintage brooch, you can see that it was produced in the 1970s because of the destinct Art Metal look.

Now you have an educated guess but don't take that as fact. You still need to look at the back, at its construction and does it have any signatures to actually assess its date more acurately.

Spend time looking at jewellery and guessing the age. I would say do not use Ebay for dating information. Most are very inaccurate and are being sold by people who do not have a clue or are just trying to get more money by listing something as being older than it actually is. The same with buying in person. I have lost count of the number of dealers that have tried to sell me jewellery that was "Victorian" but I could see that it was not. And yes I have brought something early on in my career that I was told was Victorian but ended up being something far more interesting.
Oh and don't forget the golden rule that something that has diamante or rhinestone that are of aurora borealis (Stones that have that color changing oil on water effect) - Will always date after the mid 1950s as they were invented then. Part 2 coming soon..


I also appologies for any mis-spelling this blogs spell check has gien up the ghost!

Email ThisBlogThis!Share to TwitterShare to FacebookShare to Pinterest
Labels: How to date vintage jewellery