Each year I usually choose a geek theme to collect in jewellery. In 2013 I choose dinosaur jewellery as that years theme. It has to be cheap and fun to wear. I set a limit at about £15 but rather pay just 50p or less if I can. Pound shops always seem to have the fun jewellery that is aimed at children. Yes I don't think that I will ever grow up! Back to the dinosaur jewels - it can be previously owned or new stuff. Not that I ever wear any of it. I just see what I can find and show here on my blog. So after 2012's alien jewellery collection - here are the photographs of what I found in jewellery with prehistoric dinosaurs... 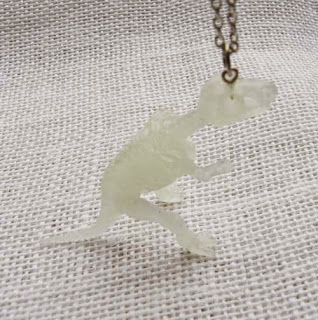 This is hard to see, but its a skeleton of a Tyrannosaurus Rex necklace. Fashioned in opaque white plastic and quite big.  Brought this as a pre owned piece. Most of the dinosaur jewellery appears to be made from the children's plastic figurines. Now that's an idea to try! 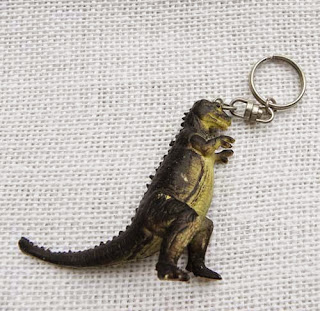 Large dinosaur keyring. Not sure what sort of pre historic animal this was and what it was actually called. Again quite large in plastic. Think this one looks like Godzilla! 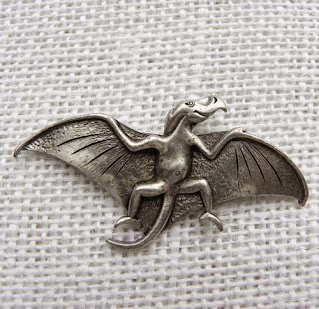 Cute pterodactyl brooch in pewter. Found this at an antique fair! Unusual and just what I was looking for... Maybe I would wear this to a dinosaur convention if there is such a thing! 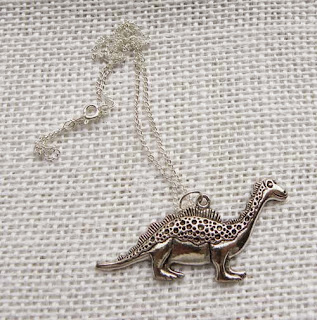 Again another new buy from that great auction website that you can get so much stuff that you didn't realise you wanted!! This dinosaur necklace is in an all silver tone. Quite cute if you like dinosaurs, especially when this looks like a Loch Ness monster necklace! 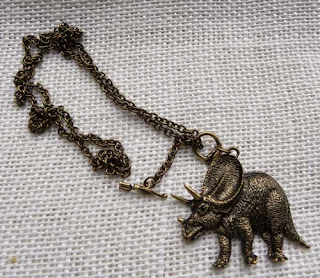 A big horned dinosaur that is very familiar but for the life of me I could not name it - so googled and found this was a Triceratops necklace. 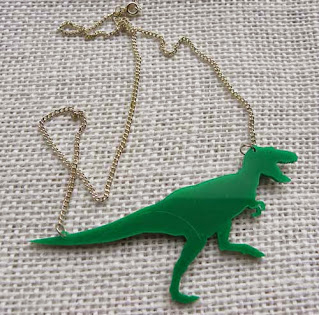 Last for now is this green Perspex Tyrannosaurus Rex (T Rex) necklace. Medium in size and fabulous kitsch wear. Now unfortunately we had a bad 2013 family wise and so my collection took  a step back. But in 2015 I am able to revive it and so will add more through out this year as well as aliens. Because when you start something like this its difficult to stop. But for 2015 I think the theme will be witch and Halloween jewellery. I already have a few pieces which I will show in a future blog. Have fun with your own geek jewellery collections..