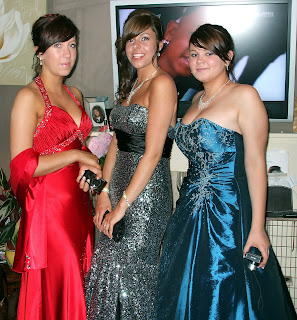 When I left school, there was no special celebration. In fact most of us met at the local pub in the evening. In those days, age was not so much of an issue. If you looked 18 years old, you got served. 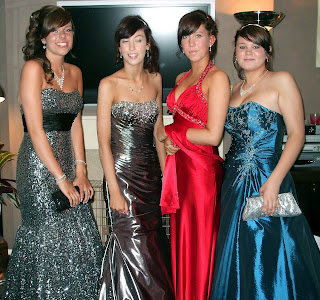 Hours spent on the internet looking at styles and colour. Her not me, I was looking at the cost and what was available where?
Then hours in the boutique, trying on many different dresses and styles. I knew as soon as she tried on her particular dress that was the one. The shop assistant firmly believed that girls going to their prom should be in a strapless, large skirted flouncy type. Not in a more grown up, slinky type that actually showed their figure. The flouncy type did not look quite right on my daughter and they were just too girlish on her. So much to the shop assistants dis-approval chose a slinky one.

Next - the shoes and bag
Both needed to be silver and glittery. Shoes chosen with the dress. The new bag from an Ebay business shop. The bag was excellent quality. But the shoes shed the diamantes. I spent the night before prom replacing and glueing them back.

Then you have the garments to create a flowing profile with no lumps or bumps. Not very flattering but necessary even if you are slim.

For prom lots of sparkling necklaces, bracelets, rings and earrings. Rhinestones and crystals. Some girls wore tiaras and had glittering hair accessories. For my daughters style of dress a simple diamante bracelet, no necklace, ring and loads of earrings. I have lost count of how many she has acquired on her ears. But she had to wait until after her 16 birthday to have more than the first set of ear piercings.

The two weeks before-

Nails - manicured and polished the day before. Weeks of non nail biting but then fake nails are available

Hair - bit of a disaster this. She had a trial run the week before. Very poor styling and the hair only lasted about two hours before bits coming down and looking a mess. An expensive saloon that frankly was making money for poor quality of hair styles. So the main hair was canceled and luckily a friend's mothers sister stepped in and did a wonderful job.

Spray Tan - She looked rather orange when she had this done first but it mellowed in the wash. Leaving a golden tan that showed the open cut detail to the back of the dress just right

Make up - After the hair dressing fiasco, the make up was canceled as at the same place. So the friend's mother's sister's friend stepped in. Her make up looked very good. Just right and not too over the top

Almost there, but not forgetting the transport to the prom. Our suggestion of a bus or taxi did not go down well and they hired a pink American Cadillac.
Well what else do you go to the prom in mmmmmmmmmmmmmm

Large limousines in all shapes and colours. English and American cars, sports cars of all styles. A fire engine and various vintage classic cars. Some came in the gleaming family cars. But dads had dressed for the part. No jeans or work suites, but evening dress were worn by many to chauffeur their daughter and friends to prom. 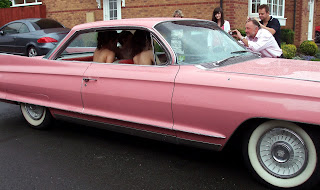 The boys also dressed up in suits. Many wore silk waistcoats and ties, co-ordinated to match their girls dress colour. Must admit they do scrub up well.

The night went well, it rained hard as usual, but it was warm. Crowds of parents, family and friend gathered to see them into the hotel for their prom. Photographs taken by the bucket load. My daughter and her friends met at a friend's house to catch the car and drive around for about half an hour before heading to the prom itself.

Now two days later, we as parents are just recovering as very tired.

Now what to do with the dress, shoes and accessories. Will she ever wear them again??

The photographs are of 4 very beautiful girls - Rachel, Emma, Elise and Charlotte as they dressed ready for the cadillac to arrive.