1930s jewellery comes under the Art Deco and pre-war banner. Jewellery from that decade was a mix of graphic, luxury and very exotic. The thirties is most associated with bright colourful 1930's jewellery, usually imported into the UK from Bohemia. Art Deco and modernist machine jewellery was in evidence but also other styles flourished in the pre war boom years.

Vintage brooches of that period were often of enamel with marcasite or rhinestone encrusted of multi colours. The signature style of Czech vintage jewellery was filigree, in a few short years it was imported into this country in the thousands such was the demand. It was evident on brooches, bracelets, necklaces, dress clips and earrings. Earring mechanisms changed from pierced to the clip and screw backs; because to pierce ears required a cork and sharp needle - modern piercing equipment had yet to be invented. Dress clips became very fashionable worn on dresses and tops singular or in pairs.


War in the UK saw a gradual change in material used, to sterling silver and "natural" occurring products such as shells, wood and seeds. With rationing until the 1950s, jewellery was available only in small quantities or "home made" Once again during the 30s and 40s, the UK saw the jewellery industry change to help the war effort.

The war brought an end to the flourishing Bohemian jewellery industry. The Jewish workers and owners either fled the country or ended up in concentration camps never to return. 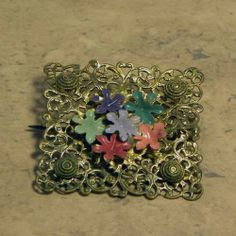 Today brightly coloured rhinestone and filigree jewellery can still be found at a reasonable price. The workmanship was by far superior to today's machine made pieces. Rhinestones were prong set by hand and the filigree is in several layers. Beware when buying "vintage" filigree jewellery from Czechoslovakia as the jewellery is not real vintage but new reproductions of an inferior quality. This is very evident now on shopping channels such as eBay.
Posted by Sue at Tuesday, October 11, 2011