The Kigu company manufactured compacts for which it was most famous for - as well as a small range of Kigu jewellery. They also produced enamelled pillboxes, folding mirrors, combs, clocks and other handbag type accessories.
The first powder compact was created by Josef Kiaschek in Hungary. Gustav Kiaschek, his son went on to start the company KI-GU in Budapest.Gustav's three sons emigrated around the world. George arrived in London in 1939 and founded Kigu of London. The Second World War stopped production as with most of the manufacturing companies in the UK. All the factories concentrated on producing items for the war effort. Paul his brother joined the company after World War 11 in 1947. After George died in 1977, his son David joined the company until the early eighties when the company was sold to another compact firm called A S Brown who produced the range of Mascot compacts. Later Laughton & Sons (Stratton) took both the Kigu and Mascot brands and amalgamated it with their own famous brand Stratton.Jewellery produced by Kigu was well made and seems to have been produced from the fifties. They produced some gorgeous cuff bracelets, earrings, brooches and necklaces. A range of simulated marcasite in earrings and matching brooches called Marquetta were produced in the 1950s. This jewellery was rhodium-plated or 22 CT gold plated. Some of the range were hand enamelled in three alternative colours. The earrings were either clip on, screw or in French wire form. The clipped earrings have a very distinctive clip finding not seen on any other earrings. 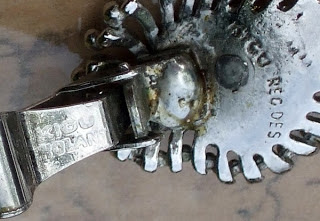 Production continued into the eighties. The mark they used was Kigu. 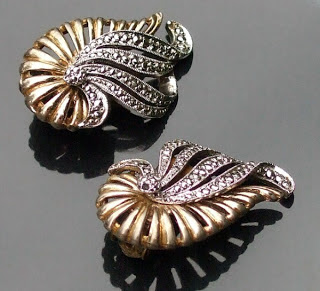 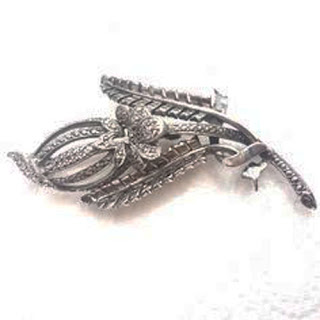 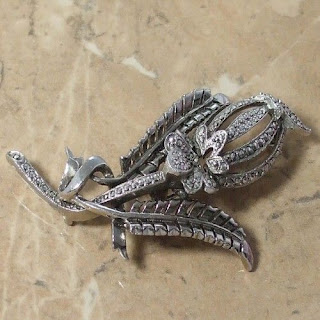 For more photographs of their jewellery and the Marquetta range. Also extensive information with photographs on the Kigu compacts and other accessories visit their informative website. Kigu of London - Kigu manufactured compacts for which it was famous for as well as a small range of Kigu jewellery. They also produced enamelled pillboxes, folding mirrors, combs, clocks and other handbag type accessories.
Posted by Sue at Wednesday, December 16, 2020