About Cameo Jewellery & Cameos of Today

This blog is about cameo jewellery and cameos of today information and history. Cameos have been around since ancient times and are still being produced today. They reflect classical history, artistic imagination, literature and fashion of the day amongst many other subjects. 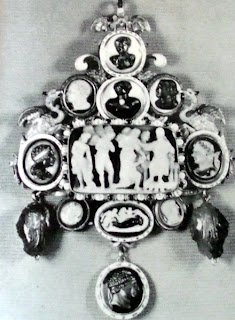 
A cameo does not have to be made from shell or a semi precious materials to be a real cameo. In terms any material that is produced with the raised profile or image that projects above the background of the stone is correct and truthfully can be called a cameo. 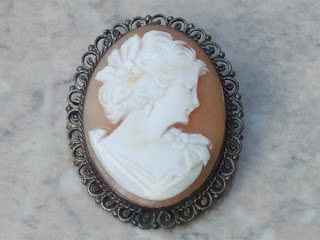 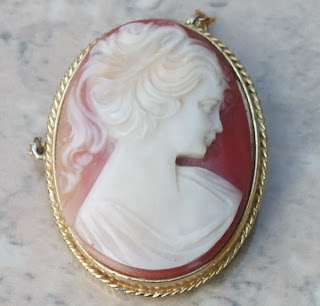 
So cameos produced of shell both hand carved and machine carved, semi precious stones like quartz, malachite, onyx, jasper and lapis lazuli to name a few. Opal and moonstone are relatively new semi precious materials used to produce a cameo. Hard stone was first used in production but other natural made materials include jet, coral, ivory, lava and bone were used in abundance. Glass, ceramic and china is still widely used and also many forms of plastics. Bakelite, galalith and celluloid are early forms of plastic and in their day were seen as cheap options; but now their prices are rising and are very collectible. The Queen has a fabulous collection of cameo jewellery many in precious gems such as diamonds. 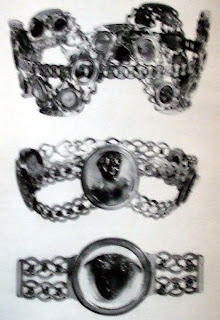 Cameo Parure of the Empress Josephine. French.
The parure consisted of a crown, a lesser cornal, ear rings, bracelet, slide and comb. All set with cameos in gold, decorated with blue enamel. Crown, comb and clasp are set with carnelians, the rest with onyx and shell. BC Museum and Art Gallery, Exhibition of gemstones and jewellery catalogue, 1960.

Cameo were produced firstly by hand carving but when machines became a way to increase production they are were molded, cast, stamped or carved. However hand carved cameo production still continues today. Always view a shell cameo with a lens or magnifier. Hand carved cameos do not have the minute "snow effect" around the edge of the profile where it joins the background, which machine or ultrasonically produced "carved" cameos have. Today fashion cameos used in jewellery, tend to be the one recognizable profile which I have christened  "The Popular Goddess" mass produced in many different forms of fashion or costume jewellery or used as embellishment on shoes, clothes and furnishing. 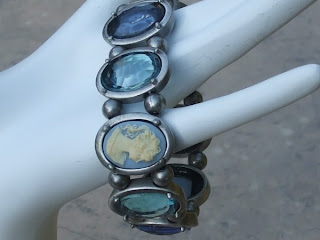 Fashion has seen cameo jewellery raise in popularity in the Victorian era until the fifties and sixties. It waned in fashion in the seventies but has never gone away - as there has always been a minority that love and wear cameos. Which has meant that cameos have continued in production to today.

Cameo collecting is very much personnel taste, many collect just shell cameo and others jet and lava. But there is a growing number who collect plastic and glass cameos. It does not have to be a collection that has large monetary or investment value of today. Fashion will influence the value of antiques (items over 100 years old) and vintage (any item about 25 years old to a hundred) So what is bought at a high price today may depreciate in value in a few years. And of course the reverse happens - items that are of low value in their times, lava and early plastics for example have in relatively few years command a high value now. 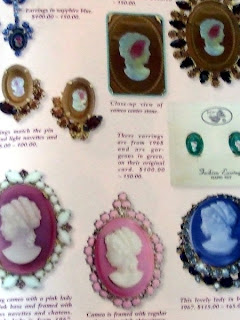 Vintage cameo jewellery that is of glass and plastic produced by designer and manufacturers: for example D & E and Sphinx, are commanding quite high prices in today's market. But it could easily be Exquisite, Hollywood or the mass produced cameo The Popular Goddess" in the future Who can predict?

Collecting is up to the individual and should be fun and affordable to each individuals taste. 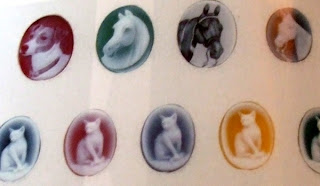 The Reicharts cameo factory manufacturing a broad range of colours in ultrasonically created cameos.
Cameos Old and New 4th Edition by Anna M Miller (Previously reviewed on this blog)
Posted by Sue at Wednesday, May 12, 2010