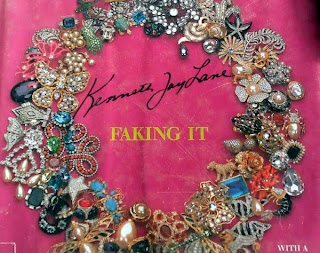 I have a fast growing collection of books on jewellery from all over the world. To increase my knowledge I read about all sorts of jewellery; antique, fine, costume and trinkets to name just a few topics

On the Jewelry Ring Yahoo Forum, recently a person from the UK unscribed because "didn't realise it was an American group" I felt very sad for this person as they have missed a wonderful opportunity to learn so much from jewellery enthusiasts and specialists from all over the world. There is a large number in the group from the US, but also from Canada, Europe and the UK. The photographs of jewellery in people's collections or for sale I would not have had the opportunity to see unless I spent hours on hours searching the net, but then would not have come any where near.  This book falls into the category of not seeing a great deal of American KLJ jewellery but well worth knowing about.

Kenneth Jay Lane's jewellery is not so well known in the UK as Butler and Wilson but is very much in the same style. 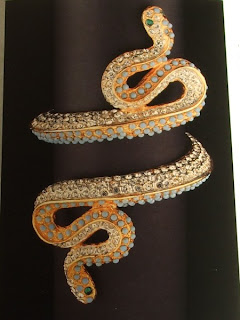 I had to send for the book "Faking It" by Kenneth Jay Lane from the USA as it was a lot cheaper (even with postage) than the UK prices.  The book is now out of print but copies can still be purchased from book dealers

Kenneth Jay Lane was born in Detroit, US and started out with a background in art, designing shoes. He began adding rhinestones buckles and before long started experimenting on adding stones to cheap plastic bangles. This was the sixties and from there progressed to designing jewellery worn by former president's wives (Jacqueline Kennedy, Nancy Regan) film stars (Elizabeth Taylor, Audrey Hepburn) and Royalty (Princess Margaret, Duchess of Windsor, The Princess of Wales) and many other rich and famous people.

He is renowned for his fantasy jewellery and OTT style. But he has many more demure pieces.
I enjoyed this book as it tells his life story and is illustrated with loads of photographs which explains the pieces and also gives dates. Although I have seen very little KLJ pieces over the years it is a very good book to read, if you want to increase your knowledge on vintage costume jewellery. 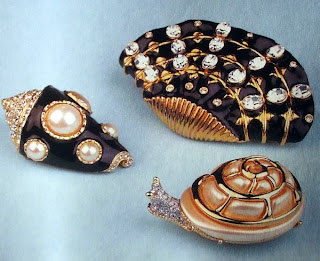 Brooches in shell and snail motif - the snail is an update from the 1960s version, reproduced in 1992
Taken from the book.

Mr Lanes jewellery can still be purchased new from QVC and vintage pieces are available from the jewellery sellers on the net.

It is a beautiful Saturday morning and this weekend will be spent in the garden. So until next blog bye...
Posted by Sue at Saturday, May 22, 2010