A while ago, the company Greggs Bakery sold cupcakes with brightly coloured plastic rings on the top as decoration. Stuck into the top of each cake was a ring, surrounded by buttercream. Aimed at kids and adults alike, it was a novel way to appeal and sell more cakes. Every now and then, I find them for sale in a car boot or charity shop. I always pick them up and give them a good wash before adding them to my fun cheap plastic jewellery collection. I have always collected plastic jewellery and I will be showing some of it on this blog at a later date. 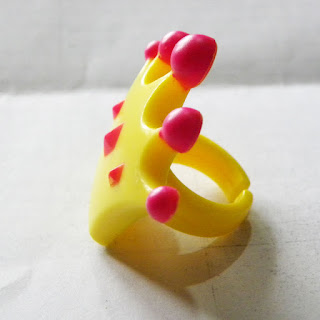 Now while I researched these rings. I came across a story of a woman who thought they were edible and took a bit of one of these rings. She broke a tooth, wanted compensation and them banned because she thought they were dangerous!!! Most people just took them of the cakes and licked the buttercream of them.
The above robust plastic ring is brightly coloured in yellow and red then shaped into a crown. It is quite large and wouldn't be able to be swallowed. 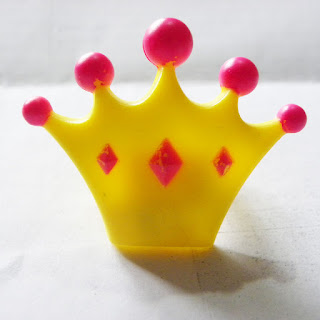 They are in quite a good finger size and fit a child to a small adult finger. With the split band, they have a slight stretch. 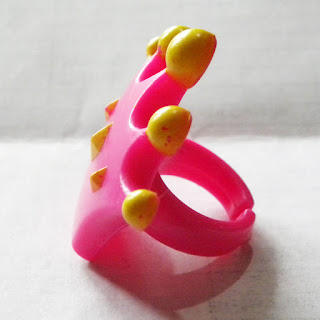 Another crown plastic ring from Greggs bakery cakes. This time in bright pink and yellow plastic. They were I think princess or queen rings. 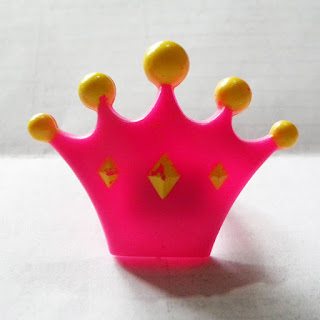 Then they had a range of googly eyed monster rings on the top of the cakes. Again in bright plastic colours. 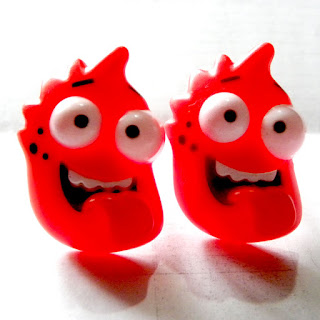 Red plastic monster rings. I have two rings here - side by side. They are made quite robust. No stamps or signatures on them to indicate where they came from originally. But as I had brought these cakes for my family I knew where they originated from. Unfortunately being gluten intolerant. I don't go into this cake shop very often as they have very little for sale that I can eat. 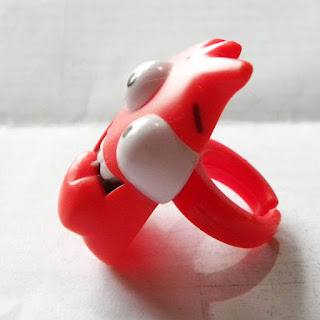 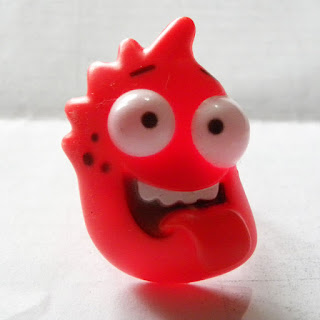 Then there is the cute purple monster ring. Not sure if they did anymore colours or designs of monsters. As I have only ever come across these two shapes. 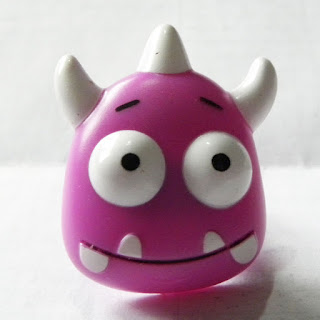 He looks quite sad really with his horns and teeth in white on purple. Again big googly eyes that are quite appealing. 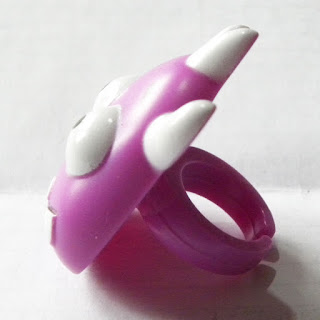 Then Greggs sold cupcakes around Halloween with a witch ring on the top. I love Halloween jewellery and so I have about 3 or 4 of these witch rings. I always buy cheap plastic and fun Halloween jewellery when I find it. As it is almost that time of year. I will have to show some of it in another blog soon.
This plastic witch ring has a typical witchy look. Black hat and hair with a bright green face and buckle trim on her hat. The front of the ring is a bit flatter and thinner than the other rings. Again the band has a split to allow some give when worn on different size fingers. 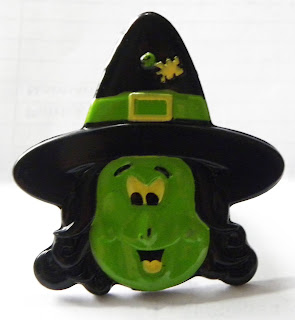 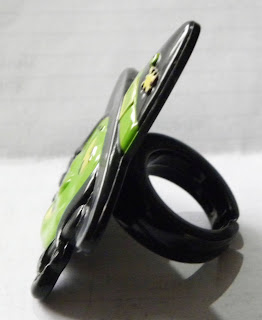 Then finally they produced a Father Christmas plastic ring on a Christmas inspired cupcake of course around Christmas time. This was a few years ago now - can't remember how many exactly, but I think about 4 or 5 years. This Father Christmas ring has a red hat with white pom-pom on. A traditional white curly beard and a jolly face. 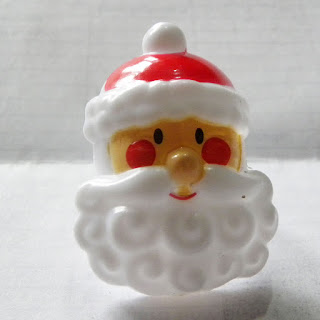 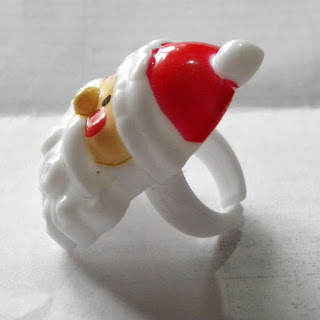 Not sure if they have these rings on cakes anymore as I don't shop at Greggs very often? But these are just a few of their novelty plastic rings that I have found out to photograph. They are fairly easy and a cheap way to collect something that is quite unusual. Just give them a good wash when you bring them home.
Posted by Sue at Thursday, September 10, 2020