Recently we went to visit the museum at the Jewellery Quarter. Been loads of times to the Quarter but never got round to looking at the museum. Well worth a visit, especially if you are interested in how antique gold jewellery was made.

The museum is in an old terraced house that once was the working premises of the Smith & Pepper company, 75 to 79 Vyse Street, Hockley. The mark on their jewellery is S & P.
Uncle and nephew, Charles Smith and Edward Pepper, rented one house that Charles lived in and the one next door. Turning their home into a factory was not unusual in those times. In the late Victorian period many people in the Jewellery Quarter did this or rented the front room out for industry. Eventually building an extension workshop in the back garden. Edward Pepper's only son died in WW1 and 3 children of Charles took over the family firm. Eric, Tom and Olive, the three never married or had children to continue the family business and so in 1981 when gold was at an all time high they called it a day. Eric was 81, Olive 78 and Tom 74 giving the 11 remaining employees two weeks notice they closed shop. Literally just shut everything down and left. Ten years later Birmingham City Council acquired the premises and found tool covered benches and a gold making factory suspended in time. Many of the items used were used almost a hundred years before. Every time they had attempted to modernize the workers had rebelled preferring old tradition to mechanism that could have made their life a bit easier. 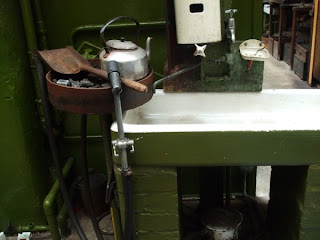 This is how they made a cup of tea - in the eighties!! 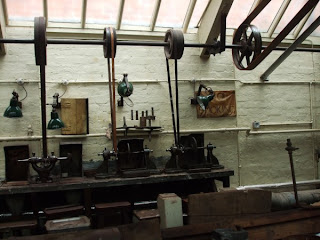 Polishing benches occupied by women workers - one of the few jobs they were allowed to do!
Dangerous work as the belts rotated on a mechanism and could snap. It was not unknown to hit a woman in the eye and blinding her. 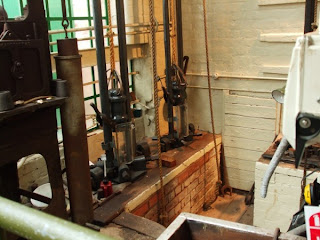 Stamping pit where one worker spent 60 years. As he became older and more fragile, the company tried to help him with a mechanism that took the weight of the pulley ropes. But he did not like it and continued to use his own strength. Pulling the rope activates the stamping machines seen behind the ropes and the weights stamp a sheet of gold.

As said earlier well worth a visit. My only regret is that the historian's of the Jewellery Quarter tend to totally focus on the fine jewellery produced in that area. But many of the factories produced costume jewellery, buttons, souvenir gifts and trinkets. In fact the vintage jewellery of W A P Watson and Miracle all originated in the Jewellery Quarter. Lambourne and Stratton were also located in the Quarter.
Posted by Sue at Friday, July 23, 2010