I really like dress clips. they came into fashion around the 1920s up to about the 1950s when their popularity waned and changed to scarf clips. 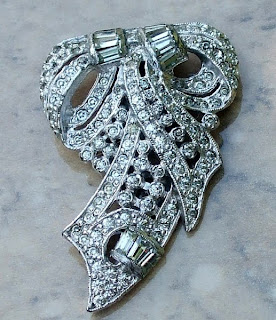 The Art Deco clips in the 1920s are easy to find with their typical look. 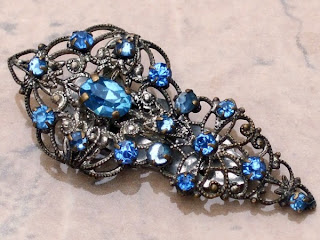 Ideal for clipping to square or sweat heart necklines. Dress clips were often sold in pairs. But one can brighten up a round or lower/plunging neckline. Now most are found as one clip, fun to collect and see if you can find a partner or use on its own

This is the back of a dress clip, not to be confused with a fur clip that has two prongs. 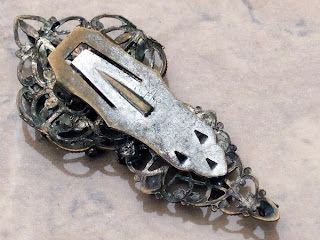 When the fashion changed into scarf clips in the sixties and more so in the seventies, manufacturers used part of the dress clip plate (no waste then!) and added the circular clip. Which makes dating a bit easier for the scarf clips. 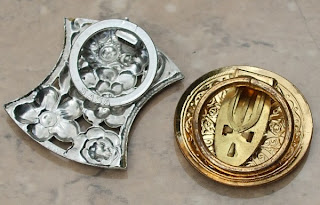 
Underrated vintage jewellery that can still be used today. Dress clips can be used on a hair band or as a necklace (see other blog post) Scarves are back in this year and there are so many ways to tie a scarf. If you can find it, there is a great book, now out of print called Living With Scarves by Lorraine Hammett.
Posted by Sue at Sunday, September 05, 2010